Angela called at 10:00am on Monday morning with this update.

“Hey guys, we are out of Washington Pass now and are headed to Mount Shuksan to climb the Sulphide Glacier.

Here is a recap of what we have done the past few days:

Tuesday we did our service project. We picked “stinky bob” around the Ranger Station, which is an invasive species in this area. Additionally, we helped out in the nursery by weeding, doing inventory, and picking out the best plants. We also made “compost tea,” which was the highlight of the service day! Unfortunately it wasn’t a delicious treat for human consumption, but high quality liquid fertilizer for the plants in the nursery. The best part was when we had to pull the worms out of the compost, so they wouldn’t die during the brewing process.

In the evening we drove over the Washington Pass in a hail storm, which was interesting, and camped. Wednesday we did climbing skills at Fun Rock. We worked on Belaying, anchors, and rappelling.

Thursday we went to Mazama and the Inspiration Route on the Goat Wall.  We ended up back at Fun Rock where we were able to do some mock leading and real leading practice. 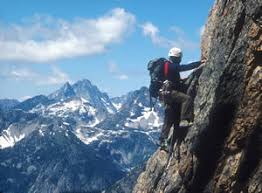 Friday, was perfect l weather and went up and climbed Liberty Bell via the Beckey route (above). What a gorgeous day.

Saturday, we went to climb Prime Rib on the Goal Wall. It is a rather long route, and so we got up most of the route before deciding it was time to start heading down.

Sunday we woke up motivated and went down to the Methow Valley and climbed the Inspiration route. After that, we headed over the Pass for the final time, picked up our permits in Marblemount and camped for the night.

Now we are headed over to Shuksan (above) and looking forward to our final climb! Hopefully the weather will hold out for us. We have been eating well, and bolstering our back country cooking skills.

Holden wants to say thank you to his Grandma!

See you guys in a few days!”
Posted by American Alpine Institute at 10:27 AM No comments:

Angela was able to get her Blackberry to work from Mount Baker this morning. As such, she sent us the following dispatch via email:

"Last Thursday after finishing up with our gear check, trip to the grocery store and one final stop at REI, we were finally off to the south side of Mt. Baker. We arrived at out base camp (an area known as Sandy Camp located at 5900') at around 4pm and settled in. Holden and John both stomped out platforms in the snow to set up camp.

We woke up to beautiful weather on Friday and the day was dedicated to 'snow school.' We ascended and descended mellow and steep snow slopes, practiced self arrest and glissading, built snow anchors, and learned a variety of techniques for belaying and rapelling in snow.

Saturday we focused on roped team travel and ice skills on the Easton Glacier. It started sprinkling in the afternoon, just as we began the steep ice climbing. Those sprinkles turned to rain within the hour, so we hustled back to camp to keep ourselves from getting soaked.

Yesterday we were up at 2am and headed out of camp at 3:15. We summited Mt. Baker at 8:45am, but only stayed on the summit for about 15 minutes due to a very cold wind. We were above the clouds all day, but unfortunately our views were hindered by smoke from forest fires. We were back in camp relaxing by 11:30 in the morning.

This morning we're about to head out onto the Easton Glacier to jump into crevasses...oops...I mean, learn crevasse rescue techniques! This afternoon we'll be hiking out and should be in Marblemount (and cell phone service) by early evening.

Holden says, 'Mom, thanks for the knees!'"
Posted by American Alpine Institute at 9:59 AM No comments: