Erin-Leigh emailed AAI with the following dispatch from the first few days of Part 1:

Upon landing in La Paz at about 13,500 feet, we were given forms to fill out for our baggage (which was a new one for me), but Customs and Immigration were both a breeze.
Climber Matt Hook was on the same flight as me, and he was kind enough to wait for me at baggage claim.  Our drivers Hildago and Diego were waiting for us with signs with our names on them and were both so happy and accommodating.  We felt very welcomed!

The driving from El Alto to La Paz was crazy!  It made Seattle drivers seem patient.  But Hildago is a very skilled driver, and we felt very safe in his hands.  It seems like in a lot of Latin American countries if you don’t get a little aggressive you don’t get very far.

We could see all the city lights of La Paz from above as we made our way out of El Alto. The streets looked like a thousand glow worms! The ride from the airport to hotel only took 35 minutes.

Check-in at El Rey Palace Hotel was easy and welcoming. They told us to get some rest and pay for our rooms in the morning.

Most of the group arrived early in the morning. We were able to contact each other via email. Some of the group woke up early to explore parts of downtown La Paz while other got some rest.

Kate, Ven, Jim, Matt and I met at 6:30 for dinner and went to a lovely Thai restaurant, Mathrao On. We passed Richard on the walk down with arms full of groceries and invited him to join, which he did later on. 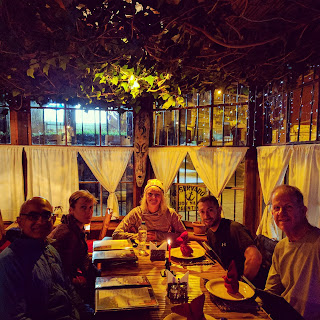 The dinner crew at the beautiful Mathrao On restaurant. Erin-Leigh Hardy.

Diego met us in the lobby of the hotel around 9 am; he was our guide for the day. And he was great!

We went to the San Francisco church/ museum, but it was Sunday so the museum was closed for Mass. We were able to step in and witness part of Sunday mass which was a very special experience.  The church was beautiful; it was more like a sparkling fortress. You could see that the walls were very thick.  The building dates from shortly after the arrival of the “conquistadors.”

Then we walked through the streets, behind the church, to a shopping district.  We saw some mummified llama fetuses (born dead) that are used in a ceremonial offering to Pachamama - mother Earth.  Wow!  Not like markets we’d been in before.

We also passed by a market inside an old conquistador’s castle with truly authentic Bolivian goods, and then later, we went to 'old town’ La Paz, which is also the art district. The cobblestone streets are original 16th-century public works installations.  We found a nice contemporary art gallery there as well as a shop with lots of postcards we could buy for messages home.
We visited a music museum where we could play with a significant variety of historical instruments.  There were also very friendly parakeets nearby, singing to us as we played the instruments! 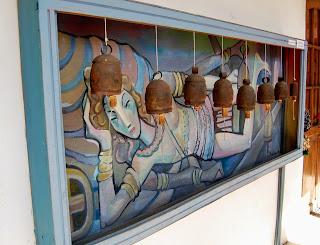 One of the beautiful instruments on display at the Museo De Instrumentos Musicales De Bolivia. Erin-Leigh Hardy.

After the museum, we had lunch at a traditional Bolivian hotel/restaurant in Old Town.

After Lunch, we got coffees and made a plan for the rest of the day. A couple of us were feeling quite pooped after the morning's activities, so we went back to the hotel to rest while the others continued the city tour.  We are looking forward to beginning our trek in the morning!