Romel and the climbing team called in each day over the weekend with the following reports on their trip.

Brian Lentz gave the following details on Saturday, February 14th after the first day of activity:

“I just got in last night, and being here in Ecuador has been wonderful so far.   Today we went to the equator, had cuy for lunch, and explored Quito.   Cuy is guinea pig, and it’s a traditional food here.  It was pretty good.  It had what I would call a gamey taste – very flavorful.  It’s rather bony, so you have to pick at it a bit and earn your lunch.

“There has been a lot to do and see here.  It’s Carnival week, so there is a lot going on everywhere.   There are many people out in the day and evening, an air of excitement, and a lot of nightlife.  There’s also a tradition of people spraying each other with silly string, but so far we’ve held off on buying any.

“Tomorrow is our first acclimatization hike on Pasachoa.  Everybody is doing fine - feeling good with no altitude problems.”

“We had a fine, mostly sunny day today.   We left town at 8:00 am this morning and got back at about 4:30 pm.  It was a great day and we made a successful hike up Pasachoa.   It was a beautiful acclimatization hike.  Lower down it was clear, but there were some clouds blowing over the top – so it was very dramatic and the breeze made it really comfortable for hiking.  There was a nice scramble up high, and we enjoyed making to two tops of the peak.

“We saw only a couple of other groups all day.   One came part way up the mountain on horseback and then climbed the final half-mile, and the other was doing some top roping below the summit.  Besides those people, we also saw a condor and a number of llamas.

“Everybody is feeling good.  No one has had a headache or any other problem.  Tomorrow we’ll climb one of the Pichinchas, and that will be good, as it will add a fair amount of altitude beyond what we did today.   Looking forward to it” 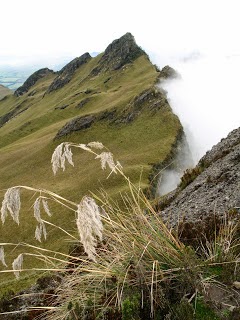 “We had a very nice climb of Rucu Pichincha today.  The weather was perfect and we got to see all the big peaks.

“We left the hotel a little after 8 am, and there was no traffic at all, so we got to the base of the tram at about 8:30.  We took the ten-minute ride up and then started hiking in beautiful sunny conditions.

“As we climbed higher, we gained views of all of Ecuador’s major peaks.  Cayambe to the north east, and turning gradually more east and then south we saw Antisana, Cotopaxi, Illiniza Norte and Illiniza Sur, and finally Chimborazo in the distance.  Some were popping out of the clouds and were quite beautiful.

“We left the tram at the top around 9 am and had easy walking with lots of views across open grass lands.  We hike about two-and-a-half hours and then put our trekking poles away as we began to scramble the upper part of the mountain.  The scrambling was fun – a little more of it on Rucu than on Pasachoa but it’s not as steep on Rucu.  The peak also has a long summit ridge, and we enjoyed walking along that for about 15 minutes.  We’ve also been liking the food, especially Romel’s tuna salad sandwich. “We’re leaving in the morning for the Illinizas.  We travel by Jeep for a few hours, and then meet horses that will move all out gear to the hut that will give us good access to both Illiniza Norte and Illiniza Sur.  We’re looking forward to starting the climbing.  We hope to climb Illiniza Norte on Wednesday and the ice of Illiniza Sur the next day.”

Posted by Wyatt Evenson at 4:37 PM