We are down in Baños de Agua Santa, now, relaxing after an exciting summit attempt.

We made our approach to Chimborazo on early Tuesday morning after a night of heavy rainfall at the Posada Urbina at 11,800 feet. We could see fresh snow on the flanks of Chimborazo in the morning and knew the whole mountain had received a new deposit. As we made our way to the south side of the mountain we could see just how far that snow had reached, coming right down to the park entrance. 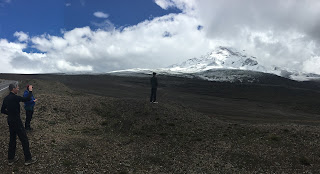 Stopped on our approach to the park entrance to take pictures of Vicuñas and the mountain.

Our bus driver, Victor, did his best to make our way up the snow covered road to the hut, and we passed many other vehicles attempting the same thing without as much success – stuck on the side of the road. After getting stuck ourselves for a minute and a some repeated (and finally successful) attempts moving around very slippery corners, we made it to the lower refuge.

We had lunch and discussed our options. With the weather as bad as it was, it seemed unwise to head to a high camp; instead, we decided to stay at the refuge and make our summit attempt from there.

At dinner time it was still snowing and windy. We hoped things would change for our 9pm wake-up time, but at 9 it was still snowing, and we decided to delay another hour and hope for improvement. At 10pm the snow had stopped, and we could see towards the upper mountain and make out the ridges up high.

We all got up, dressed, and made ready for our summit attempt, and by 11pm we were heading out in the snow. It wasn't perfect by any means, but we were ready and thought we would climb the lower slopes, give it our best effort, and see what developed.

By the time we had climbed several hundred meters, things changed, and the sky lit up with lightning, with thunder following shortly thereafter. We immediately turned around and headed back to the safety of the refuge. We called it good for the evening and decided to wake up and see what the morning held.

It snowed all through the night, and there was 10cm of fresh snow at the refuge on Wednesday morning, which meant there was a lot more higher on the mountain. We used our satellite phone to call for a weather forecast to see if there was any hope things would abate in the near future. Unfortunately, the forecast only showed further stormy weather for the remainder of the week. It seems that every part of the world is experiencing inconsistencies with the local weather norms!

With this news and probable unattractive avalanche conditions higher on the upper mountain, we decided to call our attempts there and head towards Baños. But we still had a few complications to face. Because of the snow, our bus would not be able to make it to the refuge, so we loaded up the jeep that we still had at the hut with all our bags and hiked the 8km down the snow covered road to meet our bus. We were soon safely off the mountain.

Our 2.5-hour ride to Baños yielded no sun and lots of rain. It was obvious this weather was not isolated to Chimborazo, but rather a regional issue that was not going to leave anytime soon. Until next time, the mountain will wait.

I was really happy with our group's preparedness and readiness to tackle this objective, and I'm sure under better conditions we would have had an extremely good chance of success. It is a very strong team, and I congratulate them on successful summits of Cayambe and El Corazón as well as for all the new skills acquired during the trip.

It's been a great experience and I'm going to miss our team members. 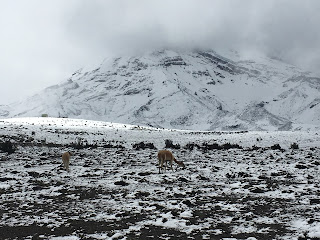 Vicuñas spotted on our morning approach to Chimborazo.