Alasdair emailed us Sunday night (7/22) with the following dispatch:

Today was a great day! We spent some of the morning and early afternoon wandering the markets of La Paz. Sundays are fairly quiet in La Paz with the exception of weddings, and we came across two today. There is not much doubt that the people of La Paz know how to 'throw a wedding.' They are really colorful, and a lot of people get involved. Weddings are very much about community here.

We then went to El Alto for the world famous Cholita Wrestling. The Fighting Cholitas are a group of female lucha libre wrestlers. The Cholitas were the subject of an award-winning 2006 short-subject documentary, The Fighting Cholitas. This was an experience like no other and quite possibly the most entertainment I have ever had for $10.

We are back at the hotel now after a good dinner here in La Paz and tomorrow morning we begin the trek along the base of the Cordiella Real. Talk to you then. 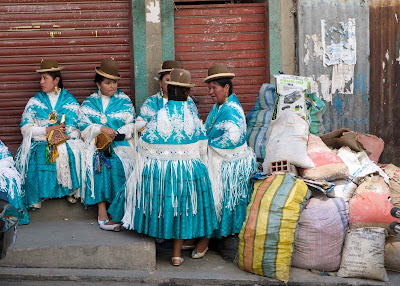 Aymara women in the wedding party. 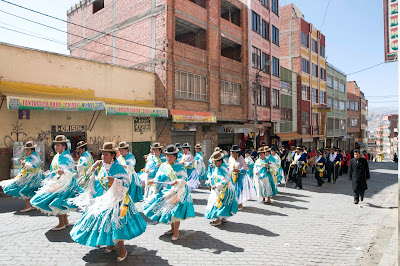 Wedding procession in La Paz with the women in front,
then the men, then the band in the rear (in red).

Panorama of La Paz with 21,201-foot Illimani in the distance.

Posted by James Pierson at 5:33 PM