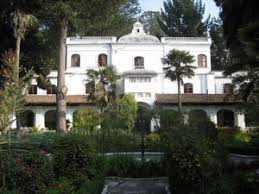 We send you greetings from Estacion Urbina at 3600 meters on the side of Chimborazo.  Today we had a relaxing morning at Hacienda La Cienega (right).  Every one has enjoyed the chance to relax after the climb on Cotopaxi.  It was beautiful at the hacienda.  It's a very mice atmosphere and there are plenty of things to do. 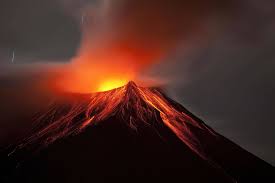 After leaving there we headed to a nice restaurant that I know and the crew tried the local 'delicacy' of guinea pig.  It's a common dish in this part of Ecuador and can be quite delicious.  Tim order it and enjoyed it, and every one else – let's say – tried it.  I think the general verdict is that it is 'interesting.'

After that we headed into Riobamba for some good coffee.  You can tell we were pacing ourselves carefully today!  We had great views of the mountains and most impressively - we were able to watch Tungarajua erupting.  It was wild.  You can see not only smoke and ash but also what looks like fire – probably molten lava flying up.  And the sound effects were quite impressive too.  Lots of "booms.'  The towns all around the mountain gave been evacuated, including Baños, where we were planning to go at the end of t he trip for the hot springs.  I wonder if the temperature of the hot springs is going up!  I'm afraid we won't to able to sample them.

Now we are at Estacion Urbina (right) on Chimborazo, and we can still hear the booming of the eruption.  The power of it is quite amazing!

Tomorrow we are going to hike up to the second refuge on Chimbo at 4800 where four climbers and I will stay, and Tim will hike with the other guide Sebastian to the high hut at 5000 meters.  Tim and Sebastian will try the ascent starting at 10:00pm, while the rest of us do some hiking and exploring.  When Tim and Sebastian get down, w e will head back to Cotopaxi.  That will be on Wednesday at about midday.  And then on Wednesday night and Thursday morning, we will try Cotopaxi again.
Ramiro who was the second guide on Cotopaxi, stayed there after we left and with a colleague, scouted and found a different route for us.  The bergschrund on the summit cone is the bottleneck and Sunday morning when we climbed there were a lot of people there.  I was also worried about them setting off an avalanche because of where they were climbing up above the bergschrund.  I didn't want our group to be vulnerable because of the choice of route that they were making.  We concluded it was safer and wiser to not be near them.
So now we have a new route to the top and we won't be exposed to other climbers' impacts.  That will be really good, and it sounds like this alternative route should be excellent climbing as well.  We are pretty excited to go back.

So in terms of what's happening now, we had a great dinner at Urbina and people are heading to bed.  It was a fun day, and tomorrow we will get really close up views of Chimborazo (below).  It's completely clear this evening.  We did a little walking and found ash on the grasslands here.  There's not much, but if you run your fingers through the grass you can see it and feel its softness.  Hopefully Chimbo doesn't get covered with it, as the darkness of the ash speeds up melting, and that is not something these mountains need!
OK, that's the news.  We're all doing well and looking forward to the next few days.  I'll call again tomorrow and let you know how the mountain is looking.  By for now."